Whiskey comes in many forms, but bourbon is America's spirit

The origins of bourbon are both known and debated.  We know early settlers in Virginia and Kentucky made use of the abundance of corn to distill their whiskey, but there are a variety of stories on who was first to put it in a new, charred oak barrel and to actually call it bourbon.  No matter the exact origins of bourbon we now have a spirit that is all American to enjoy.  Congress declared so in 1964 stating that bourbon is a "distinctive product of the United States."  Score one for America.

We're joined this week by Bruce Tierney, all around aficionado and spirit consultant to Dekalb Bottle House.  Tierney shares with us the history of bourbon, let's us know what it takes to call a whiskey bourbon, and offers some suggestions on affordable options to test the waters as well as some of the rarer bourbons to seek out.  We also discuss what flavors to look for when tasting as well as common off flavors, and a quick course on how to taste your bourbon.

There's much more information on bourbon than we could cover in this show so we've included additional information and resources here.  Side note, if you're used to sampling beer in 4 oz pours know that 4-5 1 oz pours of bourbon kick harder than you think.  Proceed with caution. 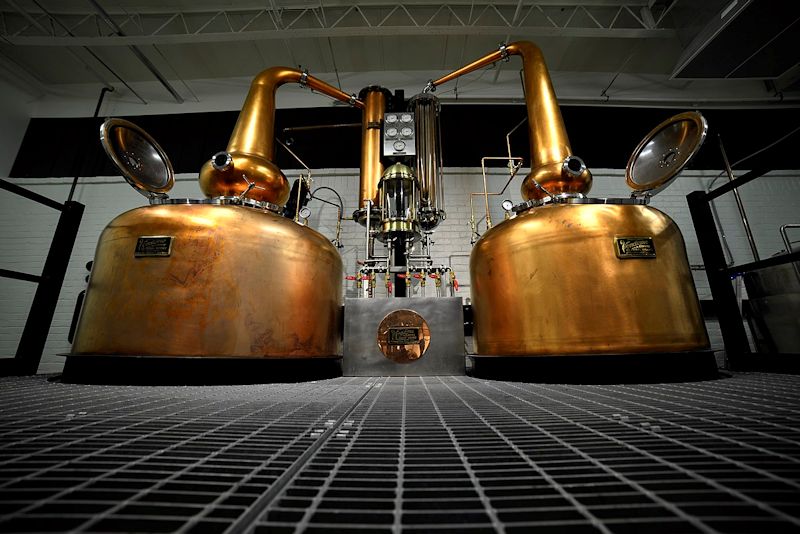 What makes a whiskey bourbon?

Outside of these requirements there are several variations allowed such as wheated and "high rye" bourbons, bottled-in-bond, straight bourbon and blended bourbons.

How to begin your bourbon experience

Tierney has offered up his very detailed advice on how to get started with bourbon including notes for selecting a bourbon, glassware and tasting. 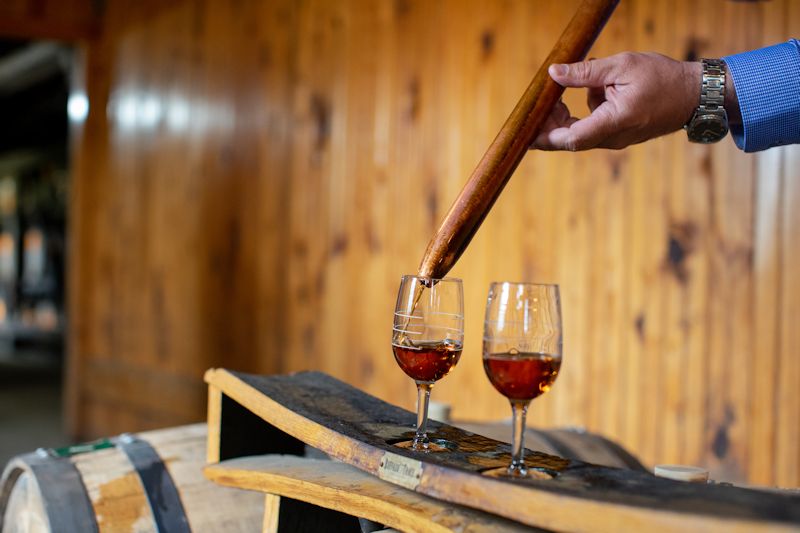 Barton 1792 Distillery
Sazerac owned Barton's primary brand is known these days simply as 1792. In the past they made an excellent budget bourbon called Very Old Barton 100 proof, a six-year-old bourbon that delivered great flavor for less than $20. But it was not not widely available and the six-year age statement was eliminated a few years ago. Barton doesn't really have a special limited release but has recently moved to expand their line of whiskeys with several new brands. But for someone new to bourbon the 1792 brand is the place to start.

Brown Forman
This distillery is primarily known for the brand Old Forester although the also make a brand called Early Times. Old Forrester 100 proof is readily available at a decent price and the recent release of Early Times Bottled in Bond is also well priced if sometimes less readily available. Brown-Forman has an ongoing release of other specialty bourbons and one annual allocated release known as Birthday Bourbon that celebrates the birthday of the founder, George Garvin Brown. It used to be more readily available and decently priced but has more than tripled in price over the last 8 or so years and is as hard to get as any of the special releases. The best place for the new bourbon drinker start is the standard Old Forester 100 proof.

Buffalo Trace
Buffalo Trace is a distillery with many brands that is owned by the Sazerac company. It has of course become the darling of the bourbon world primarily because of one name and that name, of course, is Pappy Van Winkle.  But Pappy is the brand of another company run by the descendants of Pappy Van Winkle. They currently source all of their bourbon from Buffalo Trace using the same mashbill as the Weller line of what is known as “wheated bourbon”. It is different from bourbon made under the various Buffalo Trace brand names because the Van Winkle family chooses bourbon that fits a particular flavor profile that they feel best represents their products.  Among the different Buffalo Trace brands that you may be familiar with are Buffalo Trace, Eagle Rare, EH Taylor and the Weller line of bourbons. Also from Buffalo Trace are several sought after but currently hard to find brands like Blanton's and Elmer T. Lee. The big annual special release from Buffalo Trace is known as the Antique Collection which includes George T Stagg, William Larue Weller and Eagle Rare 17 year-old bourbons along with Thomas H. Handy and Sazerac 18 year-old rye.  These have become extremely difficult to find and are usually marked up well above the suggested retail price much like Pappy Van Winkle bourbons.

Four Roses
There are four standard bottlings - Yellow Label (Which now has a beige label but is still often referred to as yellow label), Small Batch, Small Batch Select and Single Barrel. Yellow label is the lowest proof and least expensive but both small batch and single barrel are excellent bourbons well worth considering when starting your bourbon journey.

Heaven Hill
This distillery produces several bourbon brands that you may not even know are from Heaven Hill. They include Evan Williams, Elijah Craig, Henry McKenna, Fighting Cock and Larceny. Old Fitzgerald and Parker's Heritage Collection are currently two of the primary annual special and allocated releases and periodically they release Elijah Craig 12 and Elijah Craig 18 barrel proof bottlings.

Jim Beam
Jim Beam is a well know and long-standing bourbon producer of many different brand names. The classic Jim Beam "White label" can be found almost anywhere in the country. Other brands from Beam include, Bookers, Bakers and Knob Creek which tend to be a bit more expensive although Knob Creek can still be a decent value. In addition, Beam makes a second mashbill or style of bourbon that include Basil Hayden's and Old Grandad which has long been regarded as an excellent budget bourbon. It comes in several proofs at 80, 100 and 114. The 114 may be a little strong for the novice bourbon fan but consider the 100-proof version or a Knob Creek 100 proof as examples of Beam bourbon.

Maker's Mark
Once an independent distillery making a wheated style of bourbon exclusively. It is now part of the Beam family (officially known as Beam-Suntory after they were purchased by the Suntory company of Japan). Maker's Mark used to make only one bourbon for domestic consumption now they have three, having expanded first with Maker's 46, which many think is a bit better than the standard, and the cask strength Maker's Mark bourbon. They don't really do a particular special release each year but have been doing variations on Maker's 46 lately.

Midwest Grain Products / MGP
MGP is unique in that it was the only major whiskey distillery not located in Kentucky. Instead, it is located just across the Ohio river in Indiana. They are also unusual in that they don't sell their own whiskey save for a few very limited exceptions. They do now have their own brand called Rossville Union which is a rye whiskey but to my knowledge they don't routinely sell their own Bourbon. Instead, they distill and age whiskey for other companies to buy and sell under their own label. As a result, there is tons of it on the market. The best way to tell if you have an MGP whiskey is to look at the label and see if it says "Distilled in Indiana". This most likely means the company either doesn't distill bourbon themselves or have only recently started distilling and need time for their own Bourbon to mature. And while bourbon enthusiasts sometimes make fun of the fakers and schemers who carelessly bottle MGP as if it were their own whiskey, it is important not to forget the great MGP bourbon and rye that has gone into various bottlings of excellent whiskey from places like High West, Smooth Ambler, Willett and others.

Wild Turkey
Wild Turkey has long had a large and loyal following and is often a spirit that bourbon enthusiasts look for old and rare bottlings from.  Brands include the basic Wild Turkey bourbon at both 80 proof and 101 proof along with Russel's Reserve, Rare Breed and Kentucky spirit. They have also started a premium line called Master's Keep which is a unique and different style of whiskey every year. This is a case where I would suggest the Wild Turkey 101 bourbon over the standard 80 proof version as the best place to start.

Woodford Reserve
Woodford is owned by Brown Forman but made it its own separate distillery. Well sort of! It is unique for being made by using pot stills rather than the more common column style still other major distilleries use. Some people, find the Woodford has a bit of a coppery or metallic component to the taste. In any case, typical Woodford whiskey is reportedly blended with whiskey from Old Forester to create a more balanced flavor. The basic Woodford Reserve is my recommendation to try if you want to compare it to other brands. (Tierney notes this is not one of his favorites.)

Newer Distilleries
Here are a few new up and coming Kentucky distilleries to look for after you have had time to develop your bourbon preferences: New Riff, Wilderness Trail, Bardstown Bourbon Company, Luxrow Distillery (recently purchased by MGP), Angel's Envy (Port finished Bourbon)

Drink Local!
In addition to these well-known distilleries many areas have local options for Bourbon.  Check and see what's available near you.

Still want to learn more?  If you've got Hulu check out Neat: The Story of Bourbon, a great documentary featuring many of the master distillers.

Check out these other episodes...